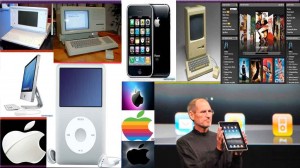 Steve Jobs, a man of dignity, value, genius mind, apple mastermind, giant of technology, inventor, architect, artist, demanding visionary, legend; so many words are there but nothing could be that much stronger that can describe what exactly Steve Job is for us and how much we are poignant by the death of our beloved Steve Job.

The late steve jobs who is not with us now; made such great inventions that are unforgettable. Today Jobs is not with us but his great work will be enduring in the top categories of invention and Jobs will remain in our heart for ever. Nobody can even imagine of doing that which he has not learnt before but Hats off to Jobs who made this reality by giving his great and speech less inventions to the whole world without any proper or formal schooling. Astonishing inventions of Steve Jobs include:-

Jobs come up with his 1st computer Apple I in 1976. Though it was in a small quantity but was really a grand change in the world of technology. It was a simple computer for hobbyist and engineers whose market price was $ 666.66.

Apple II was introduced in 1977 that came up with the color graphics and an open architecture which was purely different from its rivals and made immense success in the history of computers.

After the vast triumph of Apple II, Jobs tried to explore more in the technology world and introduced Lisa in 1983. Too expensive computer to be afforded for commercial use includes graphical user interface with icons, windows and a cursor controlled by a mouse.

Great minds are always in the search of making new and brilliant things. Macintosh was alike Lisa and contains graphical user interface but it was relatively at lower price than Lisa. It was the faster computer than ever with the backing of a large advertising campaign behind it.

The computer designed by Jobs after leaving Apple in 1989 was Next computer which was able not able to achieve that much sale but was a great move and that software is still lies in today’s Macintosh and Iphone.

The unforgettable period of Apple in which Apple sale reached to its peak after the returning of Jobs and introducing a great invention iMac in 1998. The iMac featured modern technology and a unique design, and sold almost 800,000 units in its first five months.

An ever great entertainment package in the world of music that touched the heart of its lovers can play music, videos, games, applications and much more. Further various categories of Ipod include Ipod touch, Ipod nano, ultra compact Ipod shuffle and Ipod classic that can store up to 160 GB; the most demanding device of today’s youth.

In 2007 Iphone gives a smarter and gorgeous look to the smart phones by adding the beauty of its own hand set. Iphone incorporate Iphone 2G, Iphone 3G, Iphone 3Gs, Iphone 4, Iphone 4S that can function as a video camera, digital camera, portable media player, capable of providing web browsing and receiving visual voicemail and has both Wi-Fi and 3G connectivity. Iphone is now world’s largest smart phone whose demand is increasing day by day.

The world’s largest digital music juke box available as free application downloader is used for managing, playing and organizing files on computers, Ipod, Iphone and Ipad. Itunes store allows everyone to purchase and download music, videos, games, shows, ringtones and much more. It includes everything you need to be entertained.

Just like smart phones and laptops, a line of tablet computers introduced in 2010 known as Ipad designed under the correspondence of Steve is a platform for audio- visual media and can run applications of any type. The largest selling brand device sold in outstanding quantity that ends up to 14.8 million at the end of 2010.

Where the name of Apple comes demonstrates a complete package of technology and if Apple (Steve Jobs) is not here then people would be living their life as they were 20 years back. Apple TV is a set-top-video device included among the high definition televisions. The most important feature that makes Apple TV different from others is that it connects with the iTunes store and allows you to enjoy downloading movies from internet on your TV.

However, these are only devices which are of mere importance that cannot tell what exactly we feel about Steve Jobs and we cannot forget his benevolence and love which he has showered upon us. We love you Steve Job and we will always miss you.